What is the recommended CO2 concentration in a healthy building?

Home > News > What is the recommended CO2 concentration in a healthy building?

We spend most of our days in an office or at school, we spend evenings in our flat or house – we spend most of our time indoors and it comes as natural to us. However, few people think about whether the interior environment of the buildings we live in influences our health and well-being and whether that environment resembles our natural environment as much as possible. The interior environment consists of many factors – lighting, natural light, acoustics, or noise, to be more specific, temperature and air flow, air quality (CO2 concentration), presence of biophilia, furniture layout, etc. Each of these factors may have some positive or negative influence on our behaviour, emotions or work performance. There are many studies proving that healthy interior environment in buildings significantly impacts staff turnover, absenteeism or propensity to illness. Every company owner or manager knows that employees represent the most “expensive” part of business costs; not energy costs which are widely discussed since they are easily measurable and there are various measures leading to measurable savings. Unfortunately, hunting energy performance costs savings is frequently the opposite to employee health and well-being. Let us take a look at one part of the healthy interior environment discussion – air quality.

CO2 concentration as an indicator of ventilation quality

Subsidies supporting energy savings in buildings caused a massive boom of thermal insulation for all types of buildings. In order to reduce energy loss, buildings have become virtually airtight and the image of all the energy savings makes owners reluctant to open windows. Unless air-conditioning units have been installed within the insulating process, it is certain that the buildings are insufficient in terms of air quality. Unfortunately, the air-conditioning systems installed not always bring quality ventilation as they may not work properly or be designed poorly.

Concentration of CO2 in the air is an excellent indicator of air quality, of how “stuffy” the air in the room becomes. Since every man naturally releases a considerable amount of CO2 merely by breathing naturally (air exhaled by an adult person contains approximately 40,000 ppm of CO2), measuring CO2 concentration provides us with accurate information on the number of people in closed spaces; we can subsequently use this information easily to adjust ventilation intensity. Carbon dioxide (CO2) is a natural gaseous part of the atmospheric air, it has no odour and humans have no receptors to detect this gas. However, their responses to higher CO2 concentration include loss of concentration, increased weariness, and it may even lead to fatigue accompanied by e.g. headache and nausea. In natural environment, CO2 concentration is about 400 ppm, and this value is slightly higher in industrial areas. Approximately 20 % of the population shows negative reactions to CO2 concentration already at level of 1,000 ppm. This value is frequently set as the limit value in controls of systems for air-conditioning or air recuperation in the room.

Measuring CO2 concentration does not provide us only with information on human presence in the room. Measuring it allows us to verify easily whether the air-conditioning system works properly or not. We must bear in mind that there are also other factors significantly influencing interior air quality – volatile organic compounds (VOC), dust, microorganisms, water vapours, radon etc. Measuring all these factors would be quite uneconomic and the solution would still lead to controlling the intensity of air recuperation or ventilation. We achieve the same effect by regulation based on CO2 concentration since it makes us consider the requirement to supply “fresh” air for people, airing out other undesirable parts as well. Moreover, control systems are able to ventilate rooms or office spaces regularly according to recommendations based on hygienic air quality measurement even in absence of humans.

Measuring basic qualitative air quality indicators is not difficult. The company AMiT is gradually expanding their range of freely programmable on-wall controllers with simultaneous measurement of multiple quantities. For example, graphic on-wall controllers AMR-OP70RHC and AMR-OP71RHC measure CO2 concentration. These units bring the advantage of displaying immediate CO2 values on their screens. Furthermore, they also include acoustic signalization if set concentration limits are exceeded. These units are suitable for office spaces. However, they are not very suitable for measurement in schools or public spaces since they attract curious students and vandals. This is why the range offered also includes a variant of units called AMR-OP40RHC with a blind cover in ABB Time design with one informative LED and acoustic signalization. The LED changes colours to indicate three states – green represents harmless concentration, orange represents increased concentration and red colour announces that the set limit has been exceeded. The LED colour output including the light intensity and the acoustic output can be controlled from a superior system or autonomously thanks to the user algorithm in the unit. Apart from temperature, AMR-OP40RHC also measures relative humidity. All units for CO2 concentration measurement use a sensor type NDIR that works on the principle of measuring attenuation of the infrared radiation in the air and it is generally the most accurate and stable of all types of CO2 measurement sensors. The sensor is further equipped with an autocalibration function to provide long-term measurement accuracy. 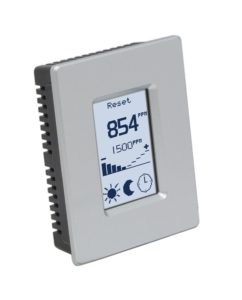 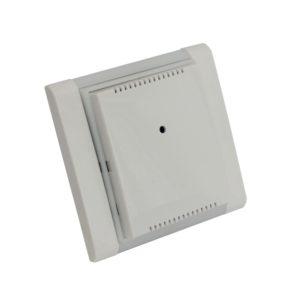 In order to be able to demonstrate the impact of man on CO2 concentration in a closed room, we actively engaged in the project Zdravá škola (Healthy School) under patronage of the Czech Green Building Council (CZGBC) where AMiT is an active member. The project aims to raise awareness of the unsatisfactory interior environment conditions in elementary school classrooms and at the same time offer concrete solutions to improve conditions for teaching based on experience of CZGBC members. We focused on monitoring of air quality, measuring acoustic reverberations and assessing lighting conditions in specific classrooms in two “ordinary” elementary schools. The AMiT company offered the initial measurement of air quality and also of long-term monitoring of temperature, humidity and CO2 concentration in further stages.

We prepared measurement tools in a form of a mobile case for this purpose; apart from measuring the qualities, the case also transmits data into a cloud supervisory system called LookDet. We made current and archive data accessible to the school management and founders by means of a common web browser. Let us take a look at the measurement results. 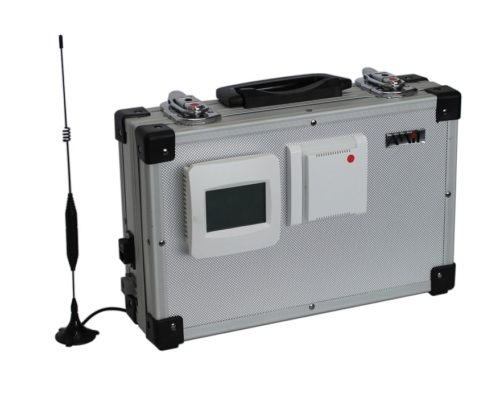 Initial measurements took place at the end of April 2017 in Slavkov u Brna and in Suchdol, Prague, CZ. Both elementary schools had modern windows and thermal insulation of the façade. Weather was with us during the measurements, since outdoor temperature dropped below average and the windows in the classrooms were almost always closed. We measured almost typical winter use of classrooms in the schools.

Values measured within several days show that the hygienic limit of CO2 concentration 1,500 ppm gets exceeded in a fairly short time, usually within the first half of a lesson (lessons are represented by grey stripes in the graph). In usual classroom routine, teachers air out the classroom intuitively or during breaks. As we stated above, humans are unable to detect increased CO2 concentration levels, and usually become aware of stuffiness in the room only upon entering it. The graphs further show that even ventilating during breaks or at random times during the day does not significantly CO2 concentration. The concentration level reached about 3,000 ppm several times during the day which usually makes students sleepy, lacking in concentration or interest in the subject. Teachers can try their best in such environment (unless they exhibit the same symptoms and fatigue), but they are unable to rise their students to any great effort. The graph also shows that CO2 concentration drops at night (by infiltration of fresh air from the school surroundings), but it never drops under 800 ppm. Proper ventilation usually takes place only at weekends.

Measurements in classrooms with an indicator of limit CO2 concentration

In the second stage, the same classrooms in both schools were equipped with CO2 sensor with acoustic and light signalization. At concentration level of 1,100 ppm, the LED changed its colour from green to orange, and when the limit 1,500 ppm was exceeded, the LED changed its colour again from orange to green and the unit gave a short beep. Both students and teachers quickly adjusted to opening windows to air out the classroom already when the LED turned orange at any time during classes. The same unit also recorded the monitored temperature, humidity and CO2 concentration to LookDet. Measured values show that CO2 concentration dropped substantially during the day. Excesses to the hygienic limit were not frequent, and when they did occur they lasted only briefly.

Despite the fact that interior conditions for teaching improved significantly, we registered comments on significant temperature swings during ventilation. Obviously, mainly students seated next to windows complained, being repeatedly exposed to gusts of cold air. Furthermore, it became clear that the air exchange may not always bring optimal results; sometimes, the air has not changed properly or the stuffy air from the classroom only mixed with the stuffy air from the school hallway through open doors.

Installation of a recuperation unit with regulation according to CO2 concentration

In the third testing stage, local recuperation air-conditioning units were installed into the classrooms that adjusted their performance according to current CO2 concentration in the classroom. Windows were used for ventilation only rarely.

The graphs from the third stage show that the quality of interior air changed dramatically – CO2 levels was always deep under the hygienic limit, there was no need to open the windows (and disrupt the lesson) and there was no infiltration of potentially harmful factors such as dust and noise from the outside. Abrupt temperature swings were eliminated completely, see the following two graphs.

The upper graph shows temperature lines in the classroom with ventilation through windows. The dramatic temperature swings are clear in the graph. Actually, the difference between maximum and minimum temperatures was even higher (more than 4 °C) since the measuring sensor is placed on the wall and therefore influenced by the temperature of the wall. The second graph show much more fluent temperature curves. Using the recuperation unit helped to show the children’s heat “addition” – during hours when the classroom was occupied, temperature had been rising steadily, even though the unit regularly ventilated the air. At the beginning, the classroom was even getting overheated at times. After we adjusted thermostatic heads, the operation mode stabilized at a comfortable temperature. Last but not least, we need to point out that the applied technology of the recuperation unit with an enthalpy exchanger provided constant air humidity in the classroom even with the day-long ventilation. Although the humidity value was near the limit value of 30 %, it has not been below it in long-term perspective. Ventilation through windows made the air in the classrooms even dryer.

The project Zdravá škola (Healthy School) used the form of articles, television and broadcast entries and managed to raise awareness about the low quality of interior environment not only at schools for the professional and general public. It helped sketch out some possibilities for improvement of the environment, not only in terms of air quality, but also in terms of lighting and acoustics.

The problematics of green buildings is very extensive, spreading across many disciplines and requiring a holistic approach in the search for optimal solutions. The AMiT company has been focusing on complex building automation for a long time, with emphasis on improvement of interior environment including monitoring of qualitative parameters and energy performance balance. 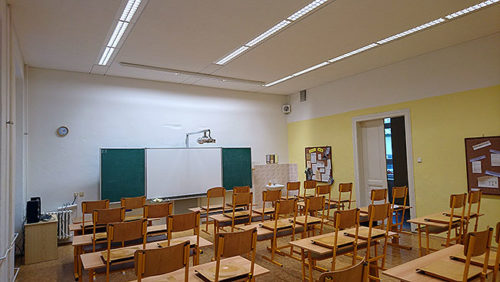 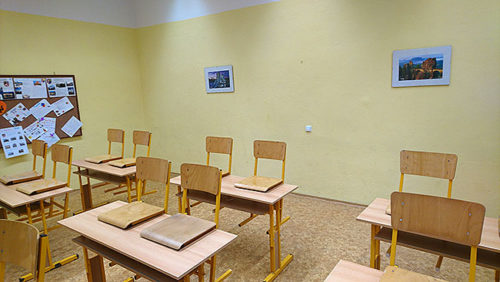 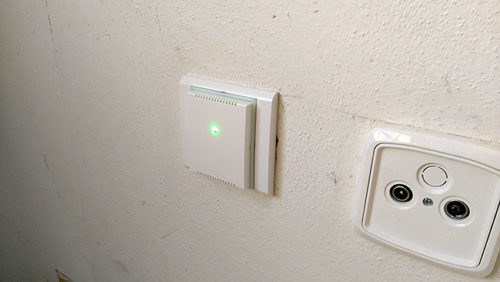 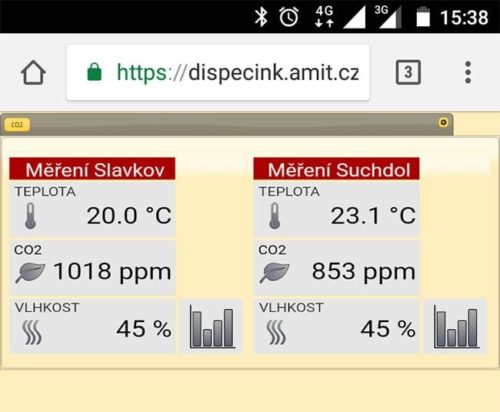