The arena was built in 1977 above a ravine located at Valdštejnova street 70. The original premises comprised only a large and a small, open-air rink. With the rise of public interest in ice-hockey, the arena quickly started to be inadequate, both for spectators and for athletes. In 2002, the whole site was reconstructed – the larger of the two rinks was roofed and a building comprising various facilities (for athletes, personnel and visitors) was constructed. Today, the arena features two ice-rinks (a larger and a smaller one). There is a total of 17 hockey-team changing rooms with sanitary facilities and 5 changing rooms without facilities. Changing rooms are also accessible for the public, as is the skate sharpening service.

The arena is mainly used by the public for various sports. It also serves as the base for a local hockey club, a figure skating club, both rinks are often used by schools of all levels and by amateur hockey-clubs. The arena can be also used for various social events ranging, from concerts to motor shows. There is a total of 1524 seats and, in case of specific events, the rink can accommodate another 700 standing spectators.

The lighting system of the arena was reconstructed in 2019. AMiT devices are used as a data collection extension system and for control via a touch-panel, remote supervision and management of the webserver and visualisation of lighting control. 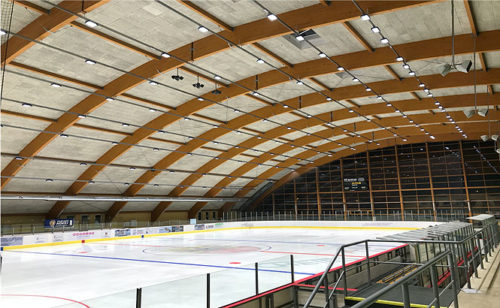